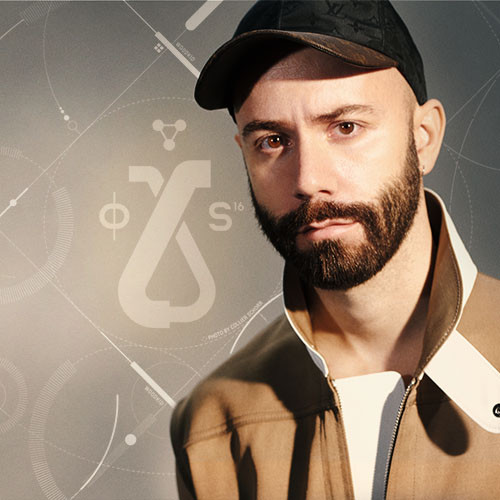 DEATH STRANDING DIRECTOR’S CUT enables players to take the role of Sam Bridges, whose mission is to deliver hope to humanity by connecting the last survivors of a decimated America. But it’s the music, created by a range of talented artists, that provides some of the game’s most impactful moments.

To celebrate the launch of DEATH STRANDING: DIRECTOR’S CUT, The Final Trailer, personally cut by Hideo Kojima himself, features the song, “Goliath”, written by the French artist Woodkid. The upbeat and punchy sounds are perfect for encouraging you over the next rocky incline or while abseiling down a mountainside as you take on your next delivery challenge.

We got a chance to chat with Woodkid to learn about his creative inspiration behind “Goliath” and gained a little insight into his next album.

DEATH STRANDING’s 3rd anniversary is coming up in November, so we would like to take our readers back to the beginning. What was your first conversation with Hideo Kojima like? What did you talk about?

Our first conversation happened in Paris. We met around my music and conversations about the gaming industry. We drew parallels between our experiences, and I think we talked a lot about what the future holds and how he envisions the future of creation. We talked about the importance of time and rhythm, that there is something almost political about making art that takes its time, that doesn’t rush.

What was your reaction when you learned more about DEATH STRANDING and what the game was about? What was going through your mind at the time? Was the concept strange to you?

I remember seeing the first trailer years ago and completely losing my mind. The level of creative complexity and singularity of Mr. Kojima’s work is absolutely unique. I don’t call it strange – I call it singular. There is obviously a certain level of monochromatic darkness that I love in his work. I relate a lot to it. We often draw parallels between our works and a certain level of symbolism that unites us.

The gameplay, for me, is political. It has this dimension of melancholy and contemplation that I think is a strong statement in the industry today. Only someone with the power of Mr. Kojima can make such a choice. I admire it a lot.

As you know, the latest release was DEATH STRANDING DIRECTOR’S CUT, and Hideo Kojima cut a special, FINAL trailer to mark the moment. What was your initial reaction when you were approached about having your track, ‘GOLIATH,’ featured in that trailer?

It was hard to believe. But I think our worlds unite. Probably because I grew up with the art of Mr. Kojima and that it infused in me during my teenage years. It’s an immense honor and a bit surreal for me. The trailer was already an immense honor, and then I played the DC version and when my music came out, I had chills. I just could not believe it. I think I cried a little bit!

That must have been such an awesome feeling! Glad you had a chance to play DEATH STRANDING DIRECTOR’S CUT as well. What were your initial impressions?

Of course! I love how political and mature the game is. I love the lore and the way the questions of nationalism and patriotism infuse the game. Very few anticipations and dystopic games manage to treat these subjects with a certain level of surprise and nuance. I’m so happy my friend Lea is in the game, too! She’s a perfect Fragile!

What did you think of the FINAL trailer when you first saw it in its entirety? What moments stood out to you the most?

I love that it is such an immersive trailer into the world of the game; only a final trailer could show so much. It is brilliantly edited, and I’m always surprised how well the music works on his images. I love the bridge part that connects with the underwater scene of Sam drowning. It reminds me of my "I love you" video that also has a lot of connections with Mr. Kojima’s work.

That’s great! Thank you for sharing that insight, and we’ll come back to that. Let's talk about your tour that you recently did! How did it go?

Pretty well. It’s a real thrill being able to be on stage with people in the audience who are connected after two years of the pandemic. It has been two rough years, because my tour was delayed for a year and a half. I also haven’t been on stage for 7 years after my first album in 2013, so it was a relief on two levels. The pandemic just increased the frustration of not being able to be on stage, and I missed touring because it’s one of my favourite art forms. It combines all I can do best: being on stage, singing, working on visuals, scenography, and rhythm. Scenography is a complete form of art; I love it, and I was really happy.

What was the most memorable moment for you?

There’s been some insane moments. I come from Lyon, and we played at Nuits de Fourvière, which is the most prestigious festival in Lyon. We had the opportunity for the first time to perform three nights in a row, which is a first in the festival's history. I also played for the closing ceremony of the Tokyo Olympics, and now they have asked me to compose the theme for the 2024 Olympics Games in Paris. I was honoured, and we were able to perform a couple of my songs during the Tokyo closing event. It was a special moment.

Before we get into the song itself, we have to say, we love the album artwork for the "Goliath" single. How did you come up with that concept?

It’s the signature album for the reconciliation with the inner darkness and the importance of it, so I wanted to create a homoerotic embrace, sexual and disturbing, and very gentle but violent at the same time. I worked with Computer Generated Imagery on a process called Procedural Growth, which is a way to alter the nature of surfaces in 3D to give them a ridiculous aspect, like magma and boiling oil. I developed these algorithms which I applied to bodies, including bodybuilders’, which created this shape, this entity which is a mix between Goliath created in the first clip and the dog created during the COLORS performance for my first album. I applied the procedural growth to a lot of objects, so they can become shapeless and have this boiling oil aspect. It all started from here, and I obviously had the 3D scan. The thing is, we don’t really know whether it's photography or 3D, and there is this ambiguity to the design which I found quite cool.

Having "Goliath" featured on Hideo's DEATH STRANDING DIRECTOR'S CUT trailer and in the game was immense; thank you again for collaborating with us on that! It's such a powerful song. What was the inspiration behind this song? Was there a particular moment when the idea or concept was made clear to you in your mind?

I was in the studio; we were recording, and I looked for the deepest wind instruments that existed. We got a contrabass clarinet which is a deep and rare instrument. It’s a huge instrument with a lot of depth but at the same time, very imposing. We’ve recorded a lot of sounds and samples with this clarinet, and at some point, there was this ridiculous sound, almost like a digestive sound. It was a very visceral sound that I coupled with a gong-like sound. The base of the song reminds me of a monstrous cycle, and I liked this sound, but I didn’t know which song I could compose with it. There were a lot of tries, but in the end, we got this song which aligned with the clip. These rotative and ridiculous sounds made me see the diggers in the Czech Republic, where we filmed the video for Goliath, and it all linked with the vision of these shovels which eat the ground: always rotating, devouring, and devouring the planet. In the end, it created Goliath. It is an ambiguous song which can be seen almost as an ecologist song and at the same time as a love song; it’s both. I always appreciate it when the themes of my songs are symbolic and metaphorical; the interpretation is open, and there is a lot in it.

The video for "Goliath" is aesthetically powerful as well. What emotions were you feeling when you first arrived on location at the mining site in the Czech Republic?

A peculiar feeling, because it’s a place where work conditions are tough and arid for the employees who work there, and the machines obviously have a negative connotation on the environmental level. It’s something in the range of the gigantic – something insatiable; it’s almost a feeling of disgust, and at the same time, there is a fascination, because it is a piece of fascinating machinery on an engineering level. They are the biggest existing machines built by man to this day – some of them reaching hundreds of meters tall. People live and sleep on it like they are real cities. Human genius is serving both engineering and environmental disaster. I had this feeling when I saw humans, I saw what humans are capable of in one glimpse, which is why I found this fascinating artistically. I never had a vision that expressed well the fact that humans are capable of the best and the worst.  On this album, I really went for the human quirkiness.

Before we wrap up, many of our fans want to know if you get a chance to play any games or listen to any music. If so, what are you playing or listening to at the moment?

I’m really into Steve Reich right now. I know him well, but I listen again to his discography because I always was fascinated by Philip Glass. But I come back a lot to Steve Reich lately, especially on the rhythmic work. There are a lot of things I’m interested in. It’s vast! I recently listened to Sufjan Stevens with Y Music, an orchestral ensemble, who composed pieces for the New York City Ballet. There are really beautiful pieces in it that are rhythmic and cheerful. It’s difficult, because I sometimes listen to music not to listen to but to analyse it. I don’t have much music in my phone really; I have playlists when I need to put music on, but I mostly listen to music when I want to dig it. I consume music as I would read a book. I take time to do it; it’s never a background. To me, music is not a simple distraction.

What’s next for you?

I’d love to develop my tours and my music in Japan. It’s something that we could never really achieve, because it’s really complicated. When we release an album, we already have to work on it in the place where it was released and then in the English-speaking countries, etc. Unfortunately, Japan and Asia are often whisked away when we don’t have the right team, and I never really had the opportunity to make my music known there. We recorded a part of the album in Tokyo right before the pandemic with Suginami Junior Chorus, and it was a declaration of love, because it’s a country that I deeply love. That’s why I think that for the next album I’ll work more significantly with Japan, because I feel that something could work there.