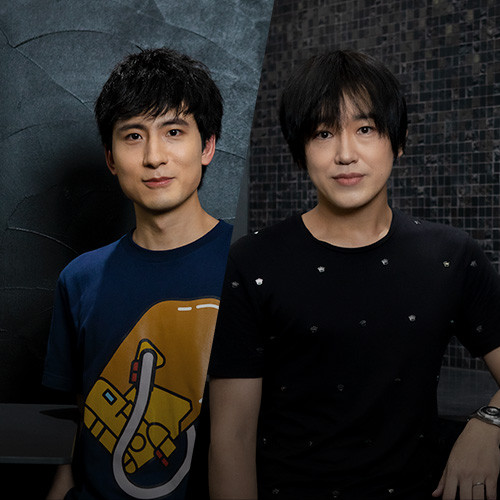 AUGUST 9 2022
【Staff Interview】
01. A Studio that answers to the aspirations of the creators.

There are many creators that bring the world of KOJIMA PRODUCTIONS to life.
In this first interview, we talked to two members of the Art team: Xuanyi Li, a UI Designer, and Tetsuya Chiba, a Character Artist.

Both of them are working on parts of the game that give a direct impression to the players during gameplay.

What do they normally work on? How is the atmosphere of the team?  Their commitment to creation is evident as seen from this interview!

Pictured right. Joined KJP mid-career. Loves to watch movies. Interested in American comics and also has his favourite anime tattooed on his body. Cannot stop creating stuff during work and even on his days off.

Xuanyi: I mainly work on 3D UI. I also handle HUDs for particular scenes, in-game logos, decals and fonts...and many others!

The UI that appears in the cutscenes are meant to be seen not just by the game players but also by the characters in the game. Therefore, unlike a normal menu screen, there needs to be a connection to the story and drama that is taking place. Teamwork with the Cinematics team and the Writers are essential to the process, so that’s quite refreshing and exciting.

Chiba: I create the character’s fundamental parts, such as the shape of the bones and muscles.

We have many conversations solely on the topic of muscles, including meetings with overseas companies and various discussions around muscle expressions – we call it the muscle meeting. We examine how the biceps should appear when the arm is bent and whatnot. I can tell a person's skeletal structure and muscular conditions just by looking at them; It’s an occupational hazard.  There are many muscles in the body and those muscles....well, I could go on forever!

Also, I have recently started teaching new recent-graduate hires, but it’s a real struggle explaining muscles and bones to them because it's a very difficult topic (laughs).

Xuanyi: Everyone is very serious about their work...and the UI team creates lengthy, detailed daily reports. I learn a lot just by listening to the conversations that take place on a daily basis.

When I first joined the company, I was worried about what kind of atmosphere it would be like since I was a new graduate, but we joke around in our meetings every day, and the atmosphere is really fun!

Chiba: The Character Team is...well...we don't talk much about anything other than work. They are all very hardworking and strongly committed to their work.

But, I still share interesting CG articles in my daily reports with the team. The team is a rather quiet group, but we have a strong connection. I also share my articles with the new hires I look after, too!

How did you end up joining KOJIMA PRODUCTIONS?

Xuanyi: When I was in college, my school held a company introduction session for a gaming company. Back then, I was quite lost about my future.

I knew that I loved games though. I first experienced Hideo Kojima’s game when I was in junior high. I recalled that my dream back then was to work with him someday. But at the same time, I thought there was no way I could work at KOJIMA PRODUCTIONS straight out of school.

But then I saw the launch trailer for DEATH STRANDING, and I remembered how I used to feel back then. Before I knew it, I found myself sending an e-mail to KOJIMA PRODUCTIONS after that (laughs).

Chiba: In my case, I was encouraged to apply by my former boss and colleagues who were working at KOJIMA PRODUCTIONS. I began reminiscing about how much I enjoyed working with them, so when the timing was just right, I applied for the job. I guess we are the same in that we wanted to work with particular people.

Also, I’ve loved movies ever since I was a kid, and the prospect of working with Hollywood movie stars was another attraction about KOJIMA PRODUCTIONS.

What kind portfolio did you hand in when you applied for the job?

Xuanyi: I turned in a self-produced work that I created in the 2 years leading up to job interviews.

I realized that although I wanted to be an UI artist, I had nothing to show! I didn't have any game UI work. So, I created a fictional game concept from scratch and prepared an animated version as my lead work.

I had also made a short video as a student that paid homage to Hideo Kojima's work, so I included that as a bonus. During the interview, I was surprised to learn that the video had been seen before!

Chiba: I selected a number of works that I had been involved with before and put them together into a 3-minute demo reel (video). I brought the most eye-catching ones to the beginning of the video and included my own personal works in the latter half.

I actually continue to make artwork even after becoming a professional. I just can't stop making things.

One is that you are trusted with and responsible for important work, even if you're new.

I was told during my interview that, "Once you join, you are a professional and have to take responsibility. You should not think of yourself as a newbie.”  These were very strong words, but because of them, when I am assigned an important task, I am immediately motivated to do it.

At KOJIMA PRODUCTIONS, oftentimes I am given a lot of freedom to work even from the concept level, and so I enjoy the moments when I can output concepts of my own interpretation that align with the world we are creating!

The second point is that we have many in-studio communication events.

We have such things as movie watching day, and we recently started a remote fitness program! I haven't been able to attend all of them yet, but I'm excited to see what's next!

Chiba: I really like the fact that everyone listens to each other’s opinions and cooperates to make our jobs easier.

If I were to say, "This tool would make things more efficient!” KOJIMA PRODUCTIONS listens to what I have to say and considers how to implement it with a positive attitude. Also, the studio has a high level of awareness regarding the incorporation of latest technology and trends. The same goes for our meetings with overseas companies.

For a creator, KOJIMA PRODUCTIONS is a very encouraging, supportive company.

Tell us about your future plans.

Xuanyi: I would like to try out various things I have never done before. While I am grateful for the comfort of working from home, I would also like to increase direct communication!

Also, I haven't had much time for personal projects since I started working, so I would like to take the time to make more things.

Chiba: I just want to make what I make, better. I want to keep creating characters that are of quality no one else can imitate.

I have a strong passion for creating, both work and personal projects (laughs).

We have a returnship program as well as a remote working style that allows employees to work from home. We are always striving to meet the various working styles and needs of our employees.

We have relocated and expanded our office this year, and we invite you to join us in creating in an environment with cutting-edge technology. As we grow our team, we have opened several new positions. We look forward to receiving your applications!

For more information, please visit our CAREERS page on our website: https://www.kojimaproductions.jp/en/careers

KOJIMA PRODUCTIONS IS HIRING!
We are looking for more team members to join us at our Tokyo studio.
Read More
Behind the scenes with Troy Baker
Troy Baker recounts his time being on the set and playing the role of Higgs, the “Man in the Golden Mask.”
Read More