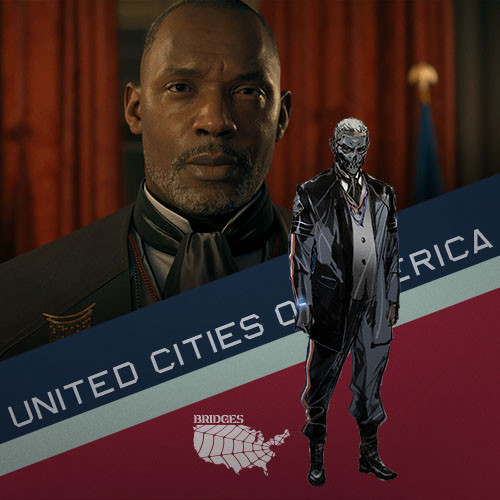 May 25 2022
Behind the scenes with Tommie Earl Jenkins

Following the release of DEATH STRANDING DIRECTOR’S CUT, actor Tommie Earl Jenkins looks back on his experience of playing the role of Die-Hardman. Die-Hardman acts as commanding officer for Sam, encouraging him to reconnect the cities within the shattered landscape to create a new and better America after it was left devastated by a mysterious event known as the “Death Stranding”.

Tommie Earl Jenkins enjoyed performing for the character of Die-Hardman and working alongside legendary game designer Hideo Kojima, sharing that the whole experience was amazing and unlike anything he’s done before. Jenkins also points out that his experience on DEATH STRANDING DIRECTOR’S CUT has made him more compassionate, as it’s helped him to realise just how much, as a society, we really need each other.

Can you think back to the moment when you were first approached about the role of Die-Hardman? What was going through your mind at the time?

When I was first approached about the role of Die-Hardman, the name of the character was never revealed to me. It was only listed as the Commanding Officer. I was asked to audition and put myself on tape for the team to review. I didn’t know much about the role other than that!

Can you give us some insight on how you prepared for the role of Die-Hardman?

My preparation was purely based on the information that I was given about the character: The Commanding Officer was a former special forces soldier with a mysterious past. He was the right-hand man of the President and in charge of assigning missions and was very talented at his job. A man of many secrets.

It didn’t take much for me to understand what was required. Although I’m not a military man and I haven’t served, I do know friends who have, and I know that they can’t let their emotions dictate their actions, so that’s where I began.

My interpretation of Die-Hardman was to be direct and matter of fact and, to some degree, a little stern with a thin veil of mystery about him. This is why I think people felt like they didn’t trust him when they first came in contact with the character in the game. I chose to keep his dialogue straightforward and not too full of character or emotion until “that scene” comes near the end of the game.

As you learned more about Die-Hardman, what was your overall impression of him as a character?

I thought he was cool as hell quite frankly: A badass of the highest order. There was so much more to him than people knew, even myself. He’s a deeply flawed man, but he also has a lot of love in his heart.

That’s the number one question that I get asked from fans all over the world. It was truly one of the greatest experiences in my career. He was amazing. The whole experience was amazing. I have such great respect for his genius. I’d love to take a trip inside his head to see how all that works in there. If ever there was the opportunity to work with him again, I would jump at the chance. He’s a BOSS!

Do you find performance capture (PCAP) more challenging than traditional TV and film production? What are some of the key differences?

Yes, I do find PCAP more challenging, because as an actor on a performance capture sound stage you don’t have the luxury of having a full set and costumes to rely on and help you get into character. You have to do all that work yourself. Your imagination is more important.

Do you have a favourite or most memorable moment from your involvement in the making of DEATH STRANDING?

I suppose my most memorable moment in the making of DEATH STRANDING has got to be filming my final confession scene with Norman Reedus. It was a very emotional day but also one of my most challenging. I always give props to Norman for being there with me 100% in the moment.

Have you got a favourite line from the script and why?

I think one of my favorite Die-Hardman lines is, “I've been to hell. Every single battlefield was hell. But no matter how terrible it got, I never died. Because all I ever did was run from death.” It sums him up. But the one that gets me is from Sam. “If you're not scared of death, how can you value life?” That is a line that makes you think.

Looking back, what's been the biggest takeaway from your experience in working on DEATH STRANDING?

The biggest takeaway for me is really understanding how much we, as a society, really need each other. We need that connection that the game talks about. Even if we don’t know it. Human connection is everything. I’ve always considered myself a compassionate person but even more so now. The covid pandemic was also a reminder of all that and funny how DEATH STRANDING shares some parallels. “Let there be no more walls between us, nor masks to hide who we are.” Powerful.

What got you into acting? Was this career always a dream of yours? What inspired you?

I’ve always been into the arts. Singing was my jam, and that’s how it all started. Then dance crept in and then theatre, and it was like a snowball effect; I just wanted to do it all! And I did, and one thing led to another and before you know it, you’re playing roles in the West End on the London stage, performing on Broadway and shooting films and TV shows with some of the industry's best actors. It's what I’ve always wanted to do, and I’m happy and fortunate to be doing it. Sometimes I have no idea what’s coming next, and that excites me. I’ve been inspired by so many artists, directors, dancers, actors etc.; too many to name. Young people also inspire me. I love the joy and ambition and fire they have, it reminds me of myself. I love sharing my experiences with them in order to help them.

How does DEATH STRANDING compare to other acting projects you have worked on?

DEATH STRANDING stands alone for me. It’s not like any other project I’ve done. I’m happy to let it have a special place in my heart. In its own category.